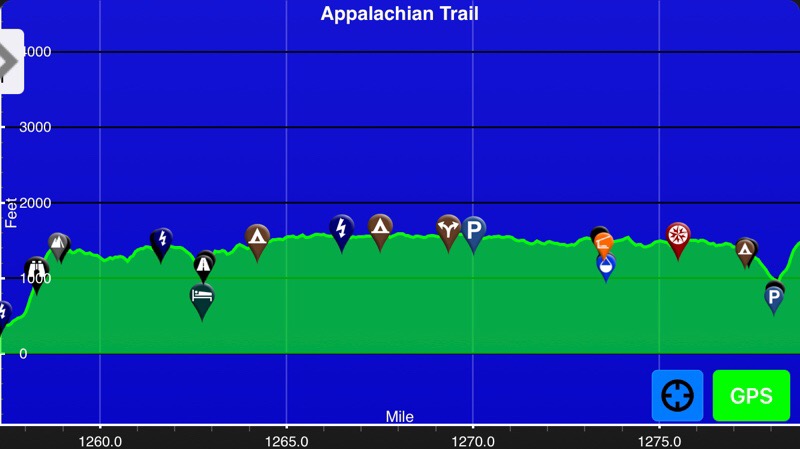 I left the RV at 5:38 AM this morning I was awake before, but I was waiting for it to stop raining. It rained all night long. So I had a very wet trail this morning. 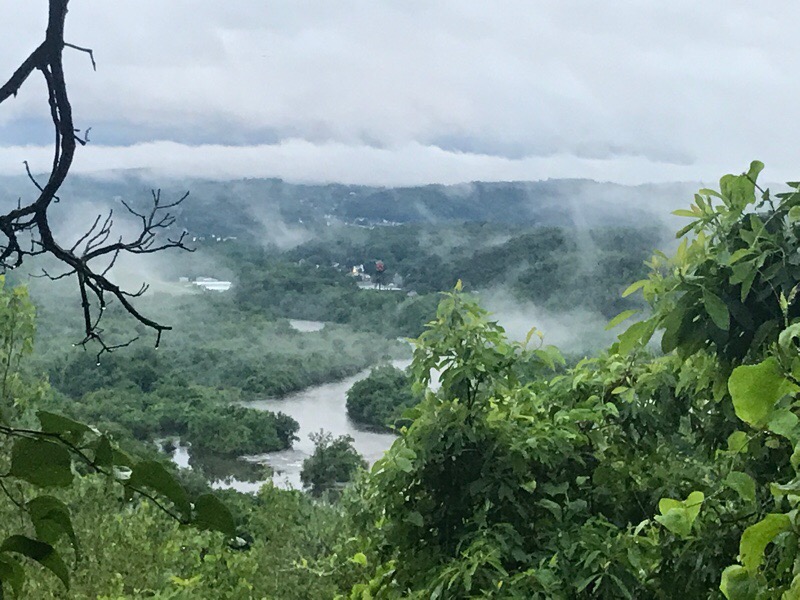 The first thing on the agenda was to climb like normal but this was a climb! Poles were put away and it was a rock scramble up – lots of fun. I was drenched in sweat within 15 minutes. The picture below is straight up. 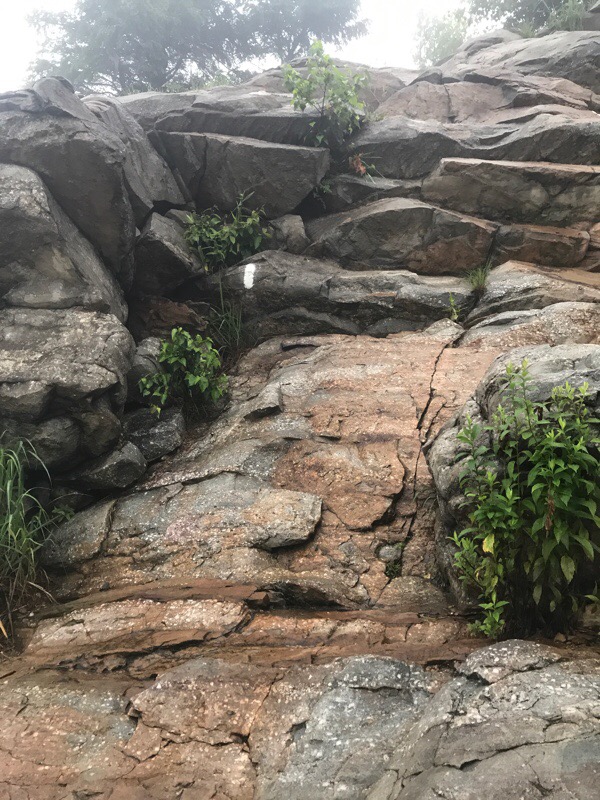 The higher I climbed the foggier it became because I was climbing into the clouds. There is something mystical about the forest when the fog rolls in. 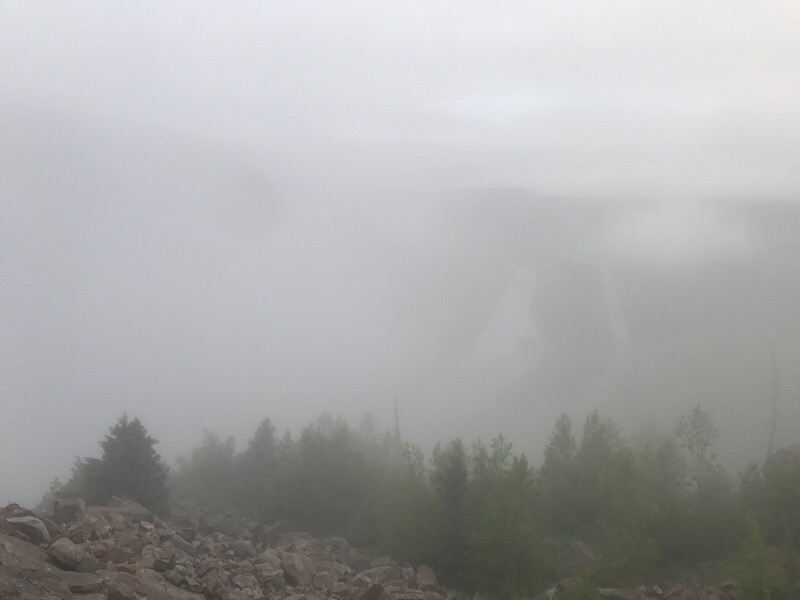 When I reach the top it was time to hike across the ridgeline. Within minutes my feet were soaking wet and my shorts too. The rain from the night before had drenched everything leaving water droplets everywhere. 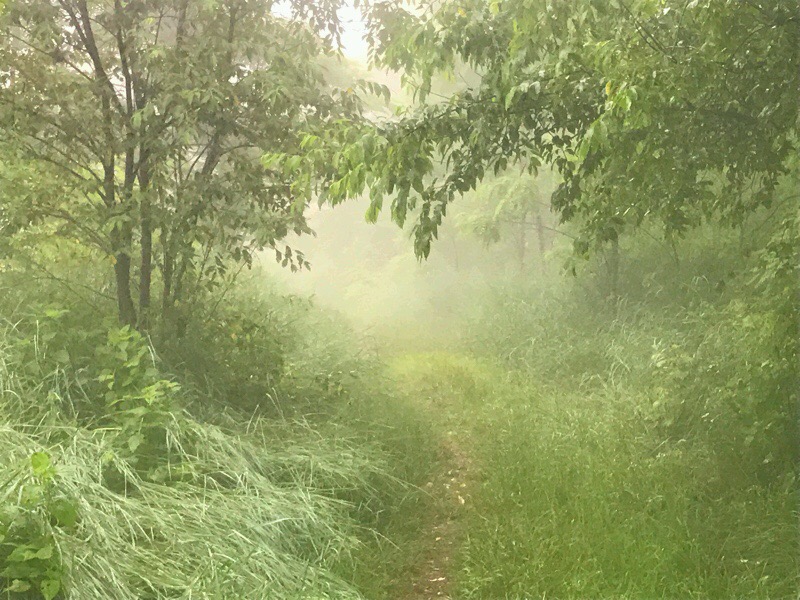 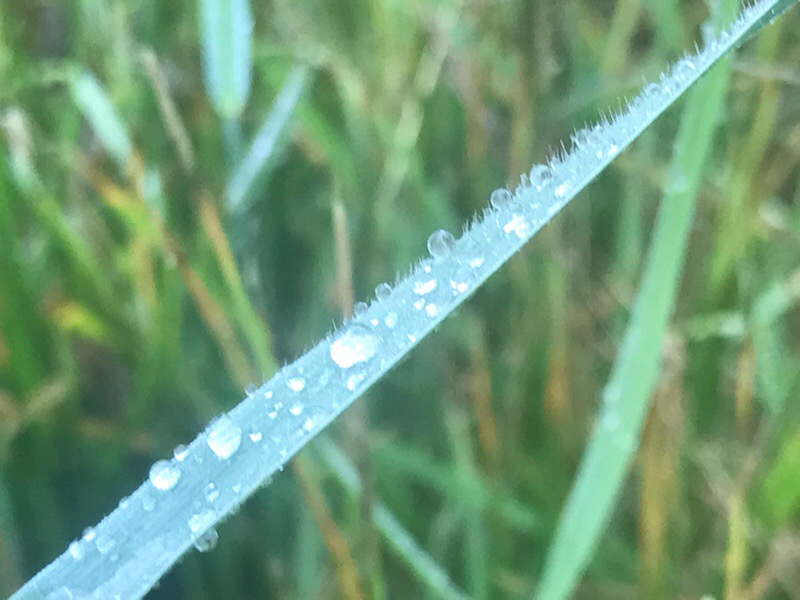 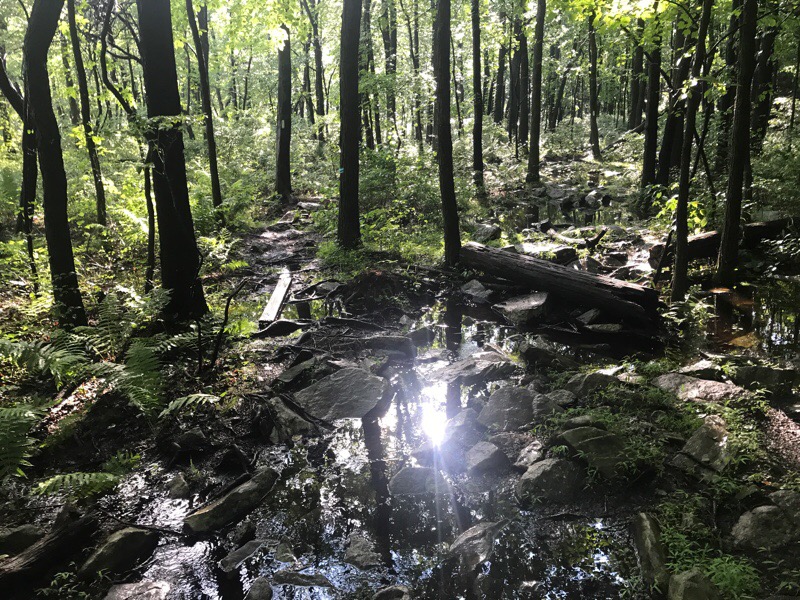 This section was supposed to be really bad with rocks.  I don’t know if it was exaggerated or if I’m just getting used to the rocks but the first 12 miles it seemed like a normal Pennsylvania day. 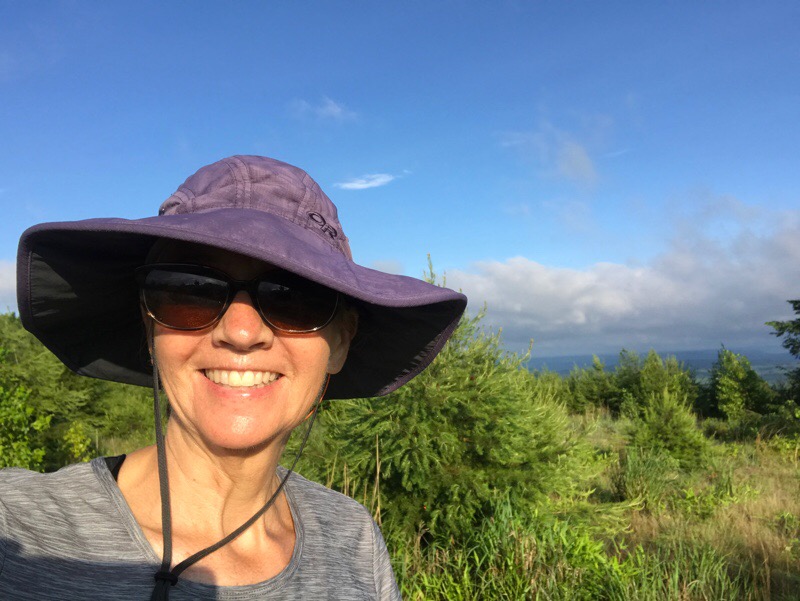 During my hike this morning for about 25 yards of the trail I followed this bunny. He would run ahead and then turn around and look at me and run ahead for a minute I felt like Alice in Wonderland.

I also came across this little guy. I’d liked his color that’s why I took his picture. 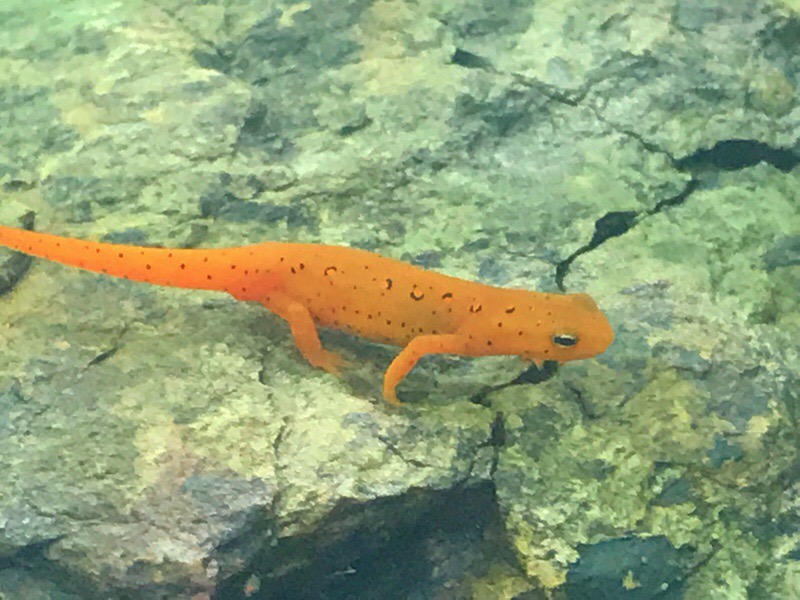 I looked at my map and saw there was a possible place for Hugh to meet me for lunch!. So I text him and he said he could do it. It was lovely seeing my guy if even for a short amount of time and getting a nice chicken sandwich to boot. 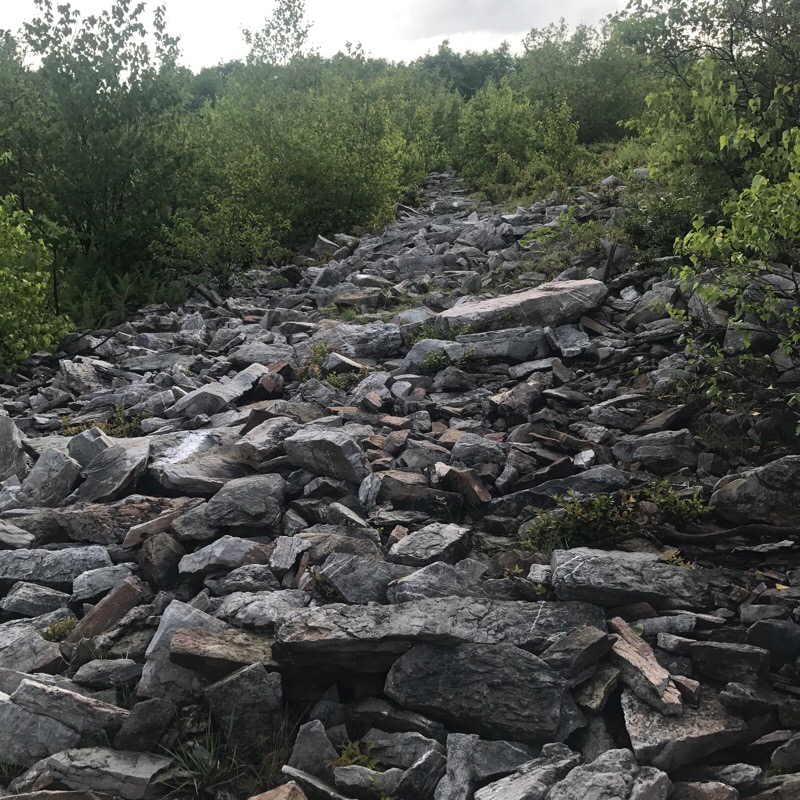 The last 8 miles were all rock. It got old…fast. There were some nice views, but the rocks were unending. I have one more day in Pennsylvania and hopefully, only one more day of rocks this bad. 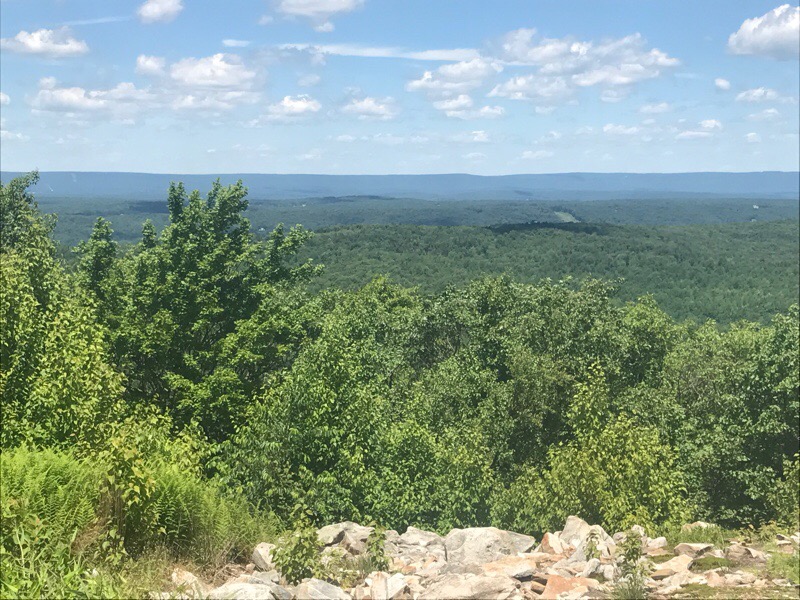 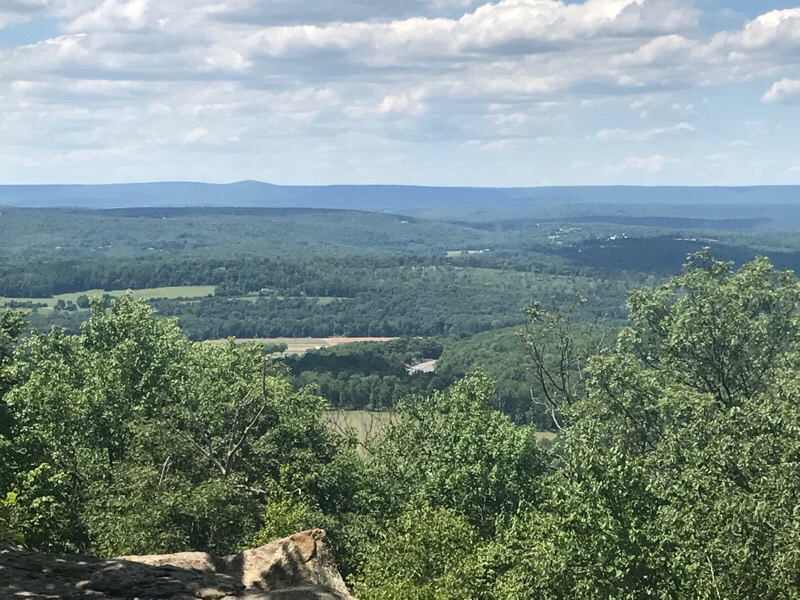 Physically I’m doing pretty good. My hands are no longer hurts. My knee gets a little stiff at the end of the day where I landed on it. But overall I’m hanging in there.

Tomorrow I will be in New Jersey. I’m getting Frank Sinatra and Bruce Springsteen loaded up – ready for my hike into New Jersey.