If the road is easy, you’re likely going the wrong way.-Terry Goodkind 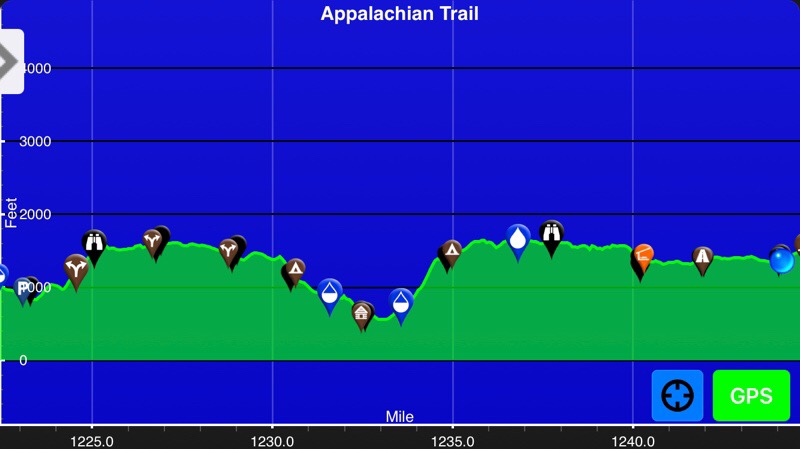 Miles hiked today 20.9. Not counting all the times I went the wrong way!

I started off this morning at 5:50 AM. I slept late since it was a nice cool night. Left the RV and then started my climb to Pulpit Rock. I meet Hugh in gaps so my morning usually always starts with the climb. I was looking forward to having breakfast at Pulpit Rock. It’s an overlook that many locals go to and I was going to get to it early enough that I knew no one would be there.

It was a beautiful spot. The mist hanging over the the valley made it very picturesque. I had breakfast and then kept hiking… The wrong way. 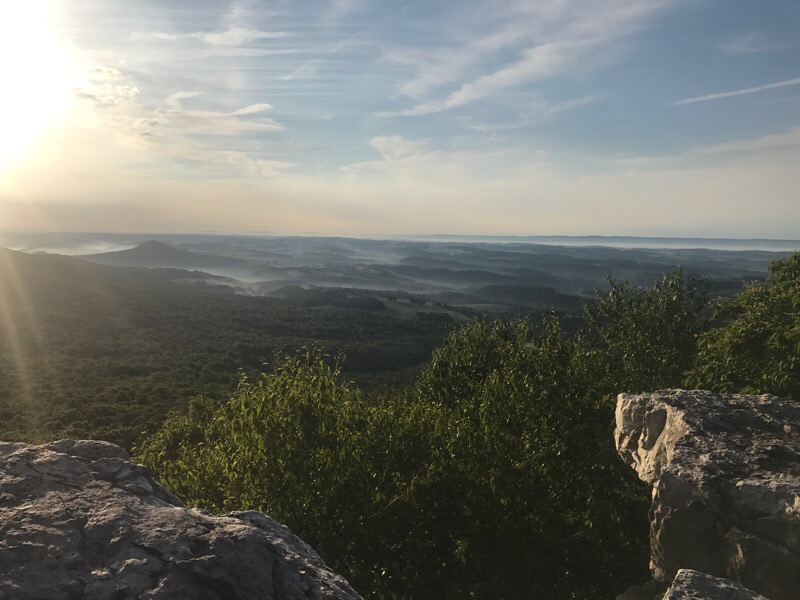 Evidently there are two ways into Pulpit Rock that meet up at the pulpit.I took one in and the other out, so I made a circle. Unfortunately, my mistake took me downhill, way downhill. When I realized what I had done, truthfully, I wanted to cry, but I said suck it up and turned around and climbed to the Pulpit once more. 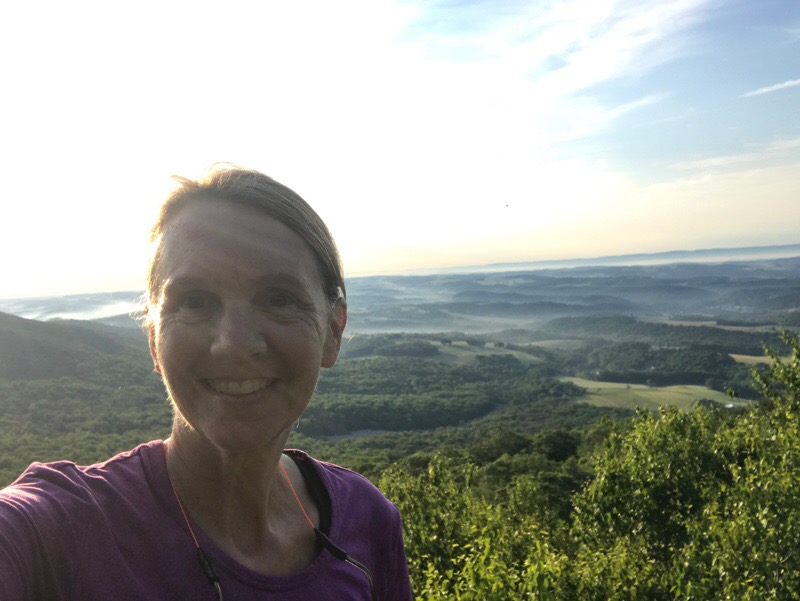 What ticks me off is I had a couple of warnings. When I first started going downhill my gut thought there’s not supposed to be a downhill now, but as it was downhill I continued on because you never turn down  a downhill. The second warning was my map on my phone. It was showing me how I wasn’t where I thought I should be. Why I thought this one time that it would be wrong I don’t know. But I even close down my phone and re-opened the app thinking I knew more than the map.

So if in nothing else is learned from this I’ve learned to trust my gut and the map is RIGHT. I deserved the extra mile walk. 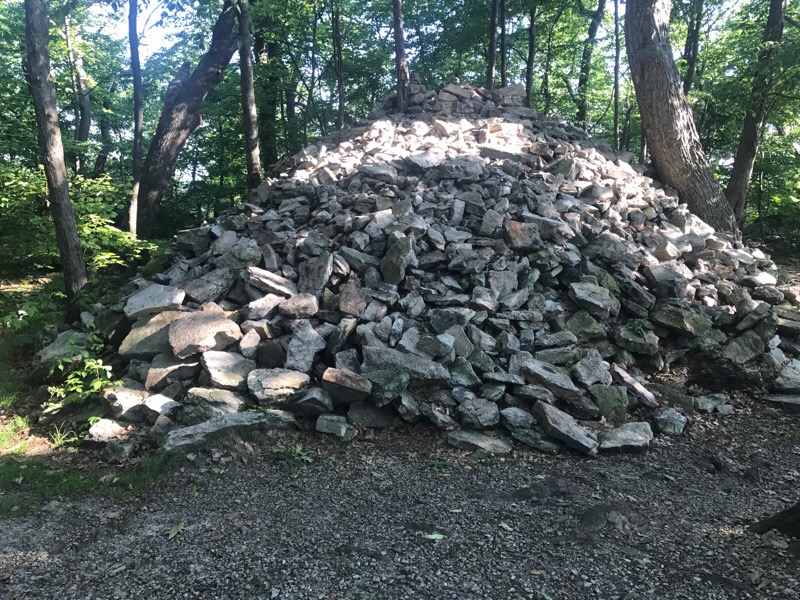 Then it was on toward The Pinnacle-which was the next vista on the trail. Right before the pinnacle I came upon this and it made me smile. I told you – Pennsylvania has a lot of rocks.

The Pinnacle’s vistas are probably my favorite Pennsylvania vistas. It was a long cliff that just gave you view after view after view. So beautiful. I’m so lucky to get to see all this!

After I came back from The Pinnacle side trail I started down the Appalachian Trail again-the wrong way-but only for about 25 feet. I do learn!. Turned around kept on walking.

After The Piinnacle I followed a country road for such a long way.  It was a perfect for walking! There were hardly any rocks whatsoever. I was loving Pennsylvania about now. I was so into walking the road that I missed my turn – AGAIN! I kept walking down on that road and it wasn’t until I saw a rattlesnake, that I couldn’t get past, that I pulled out my phone (to take a picture) and realized I was not on the trail. So turned around and walked back up hill (of course it was up a hill) until I found my mistake. I’m usually smarter than this.

And then HELL started…

Then came rocks, oh my goodness rocks, rocks, rocks, rocks. And every shape and size. Large boulders, mini boulders, large rocks, small rocks, pebbles.  You name it they put it on the trail. It was an neverending. There was no relief. Oh and by the way I figured out on this particular day, my shoes ARE too small. 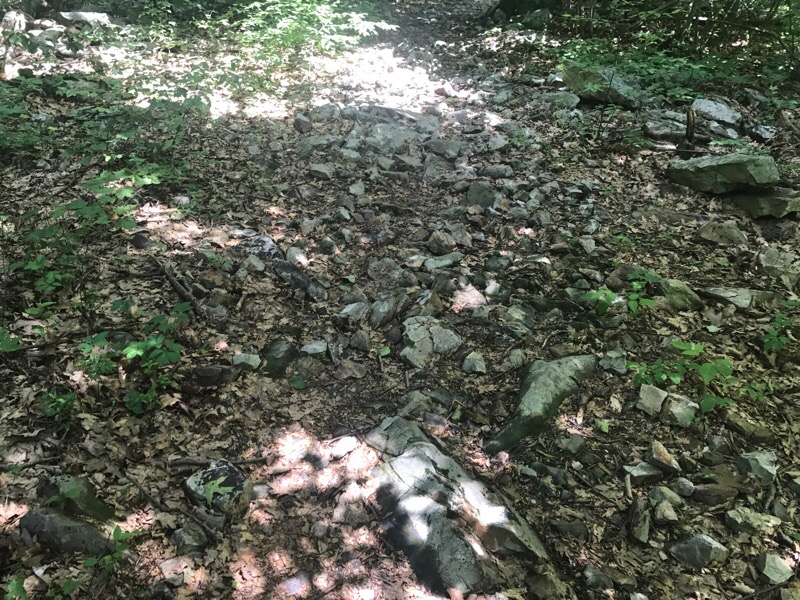 There was a section with the large boulders that had trees literally knocked down over them and I could not find the trail. I had to rely totally on my map to figure out where I was going. It was a mess.  The blow downs totally obscured the trail. And, I do have to mention this section of the trail is not well marked.

The rocks continued for the rest of the day. My pace slowed. And then with about 3 miles left the gnats descended. I was plagued by gnats for the last 3 miles.

I was never more happy to see Hugh and RV! He had the hot water turned on and a cold Pepsi waiting.
Life just got a lot better!